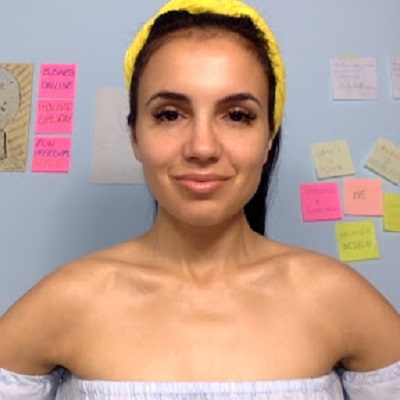 She says it has been a struggle to understand where her sexual power comes from and to be comfortable standing within that power.

She tells the story about her conception and her parents, you know getting pregnant with her and how it was an accident.

Basically, they weren’t married in a time and place where that wasn’t okay, and she ended up sort of internalizing a lot of their bad feelings and she didn’t really understand until she was 12. At that time they shared the story with her where some of those feelings were coming from.

And she had to rise above the conservative religious background that she was raised in, one that made her feel sex was “taboo” and something to be ashamed of, and really take ownership of her sexuality. And to start to question and evaluate everything about who she is, how she shows up as a woman, what she wants in sex, what she wants in a relationship and really sort through to figure out what she wants to keep.

She also feels she grew up with the belief that once you have sex with someone, they will lose interest in you. She also tells us about several other interesting “a-ha” moments and revelations along her journey.

Anca also tells us about the important work she is doing, helping others to re-write their story into something that is completely authentic.

I hope you’re going to enjoy the story and get something meaningful from it for yourself and here is my conversation with Anca.

p.s. Today’s episode is another in my series of personal stories. I am really enjoying these. In fact, I want to invite you if you’re listening and you would be open to appearing on the show to share your story. Please get in touch.

We can make it Anonymous. Although your voice is heard, or not, depending on your preferences and I am willing to talk to you as an individual or as a couple.

But if you’ve got a transformation in your story, if you’ve got something that people could learn from that could inspire them, or just give some hope that things can change, I would love to talk to you. So send me an email, change@jessazimmerman.com, get in touch through the podcast, anyway, you can and let’s set up a time to talk.