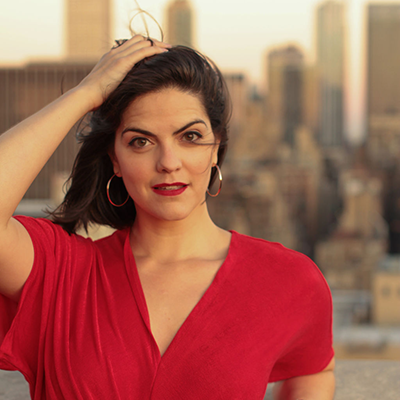 Listen to “173: Self Love Secrets From a Bra Fitter with Kimmay Caldwell” on Spreaker.

Self Love from a Bra Fitter with Kimmay Caldwell

On this episode we hear from Kimmay Caldwell, an Undergarment Educator and Coach, whose 20-year-old self, working as a bra fitter, was struck by how people viewed themselves in the mirror. The harsh narratives people came up with while trying on a bra made her transform her own relationship with her body. Now, Kimmay supports all those people who struggle with self-love, self-acceptance and body image through her coaching work. Kimmay covers everything about loving yourself and owning your body.

Becoming a self-love coach and an undergarment educator

Kimmay was an independent and struggling full-time student in New York City and became a bra fitter at a bra shop in Soho where she met all kinds of people from different backgrounds. In the pre-Instagram period of hiding cellulite and stretch marks, Kimmay (like many others) struggled with body image and self-acceptance. Being a bra fitter gave her a window into the most vulnerable parts of people’s minds- what they see when they look into the mirror. The negative stories that people came up within that intimate space made Kimmay reflect on her own relationship with her body. It not only inspired her to improve her perception of her body and image but also inspired her to support others in their own journey of acceptance and love.

Kimmay says that breasts and genitals are the most intimate and sacred parts of our body. However they appear – full breasts or a flat chest, it centers our energy. When people feel shame and discomfort with those parts of their body, it can throw their energy off.

How did Kimmay help as a bra fitter and now as a coach?

Working as a bra fitter in retail, Kimmay would encourage people to see something positive when they experience intrusive thoughts like what their bra size means to them. Now as a coach, Kimmay started with bra fitting sessions where she addresses three things – confusion, discomfort and shame, to get people to start liking what they see in the mirror. Confusion is the educational part of the process about bra sizing, what fits and the differences. Discomfort people feel can be addressed by fitting them into their right bra size. One of her thoughts is around how wearing your right bra size is much like fitting into the right size shoes, it’s about being comfortable in what you wear. Shame is tackled by addressing stories around body types, what it means to them. Kimmay explains how shame grows from the stories we tell ourselves and how shame blocks confidence, potential and connection with our bodies.

Kimmay created the “Hurray housekeeping method” where you view yourself as a house, from the foundation up. It serves women who aim to be successful and achieve bigger dreams.  She rightly believes that the kind of person you are outside to the world and in your relationships, at the end of the day, you come to yourself, to “your head and heart space” as Kimmay says it. It’s important to feel comfortable and at home in who you are. To make that happen you change how you talk to yourself, the stories you tell yourself.

Inside, outside and underneath – meaning

Kimmay gets into explaining what her tagline “inside, outside and underneath” means. In taking a holistic approach Kimmay supports people by working inside out. The inside part of the process includes a relationship and connection with your inner self. Changing the way you perceive yourself and the way you communicate about your appearance could transform your inner self. She then guides them into the process of addressing concerns underneath your clothing, which is done by educating people about undergarments. In the next step, she looks outside a person including their job, how they present to people, relationships and more. Kimmay emphasizes the need to connect with yourself first before connecting with someone else in a relationship.

Wearing lingerie for yourself

Kimmay talks about choosing the right bra that fits as a deep clean that leads to a path to transformation. Comparing it to cleaning an actual house, Kimmay explains how it’s a slow and an ongoing process that doesn’t happen overnight or change everything about yourself. Kimmay works mainly with people in their 50s who have time on their hands to focus on themselves and those going through menopause and dealing with changes to their bodies. It opens up an opportunity for them to not only find a right fitting bra but also feel different about themselves physically and emotionally. Kimmay points out the importance of wearing bras or any undergarments as a treat for yourself, to feel the confidence and comfort and not with an expectation for someone else to see it.

Kimmay gives a wise takeaway of bra fitting by asking people to stop using numbers as a definition and instead use it as information. She urges people to give those definitions to numbers which could also be their salary, age or weight. Understanding information on bra sizing, how it works and what works for you is important. She addresses misinformation that’s been taught about bra sizing.

It’s also a part of misinformation that we don’t know the right way of taking care of our bras, how to wash them and to put them on. She offers free information around this on her website. Kimmay talks about her campaign “More Than My Numbers” where people of different sizes, colors and body shapes are featured and they measure themselves and share their sizes.

Using lingerie to help with intimacy in relationships

Kimmay talks about how certain parts that are covered by undergarments and lingerie itself are sexualized. She points out that you can have never had sex and still use lingerie, like everyday bras or T-shirts that make you feel sexy which gets along well with the exciting fact of loving yourself by dressing well underneath your clothes. Giving space to feel confident with who you are and your body, and feeling of course a bit frisky. Those things can then be brought into an intimate situation with someone’s intimacy at its core. It’s all about vulnerability. Being vulnerable in front of someone is hard when you don’t feel ok with your body, so it’s easier when you feel loved and accepted. Lingerie is also used in a way of self-love to show up bigger in the world. She shares some tips about how to spice up your relationship with lingerie.

Kimmay Caldwell is a self-love coach and Undergarment educator who supports people to say “Hurray” inside, outside, and underneath. She is an expert bra fitter with over a decade of experience of getting intimate with people from cup sizes A to N since 2005. Years in the fitting room illuminated the stories people had about their bodies, their self-worth, and their dreams which helped her become a coach and tune in quickly to what will serve her clients best. Now her newest offering, The Hurray House Method, supports people to do the daily inner housekeeping and self-care necessary to show up big in the world.

Formerly based in NYC, she is now in rural Oklahoma and travels around the world to spread her empowering message of self-love, and how to use the everyday ritual of putting on a bra to uncover your confidence, stand in your power, and learn to love yourself. You may have seen her in one of over 100 press outlets, including more than 5 times on The Rachael Ray Show, plus the Martha Stewart Show, The Today Show, and more. Or perhaps you caught her teaching bra fitting workshops at the largest lingerie expo in the world in Paris.