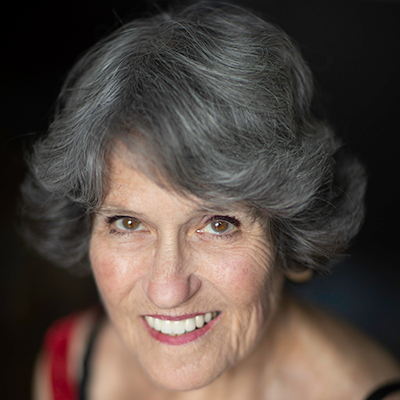 Joan tells us that being a senior sex advocate is her third career. She lived as a high school English teacher until a car accident made her acutely aware of the privilege of being able to be and stay mobile. She tells us that insight inspired her to become a fitness trainer, group exercise instructor, and health and fitness writer. After falling into what she calls a “planet-shattering” romance at the age of 57, she understood that great sex was a crucial element of romance at any age. Her research into overcoming the challenges of senior sex and increasing the passion and intensity of senior sex revealed an empty market niche, encouraging her to jump into the market by sharing her own experiences and adding her own research to the topic of senior sex.

She explores the misconception that sex is no longer experienced in old. She says that many believe that when people are older, they give up their sex lives and take up crocheting instead. “I have nothing against crocheting,” she says, “but it’s not sex.”

Joan admits that senior sex is not the same as the sex people have in their twenties. Bodies age and change, and she suggests that our sexual history can impact our sex lives.

She tells us that many people presume their sex lives are irrevocably declining when their knee arthritis prevents their favorite position, they take too long to orgasm, their erections are unreliable, penetration can become uncomfortable or intercourse may not feel as good as it used to. Joan believes that hurdles like these can be overcome when they’re acknowledged out loud and discussed with our partners. She admits that sometimes these are medical issues, while others are best solved with creativity, research, and an enthusiastic partner’s work.

Joan mentions that many elderly men and women insist that their desire to have sex is gone. To combat this belief, Joan describes writing a blog post on hotoctopuss.com about the difference between spontaneous desire and responsive desire. Many people believe that if spontaneous desire goes away, they no longer want to have sex, but that’s inaccurate. Responsive desire, she explains, exists when your body begins to engage in sexual activities, and you slowly develop a real desire and passion for sex while you’re engaging in the act.

Spontaneous desire, where a person knows they’re aroused and wants to have sex actively, often fades with age due to the hormones encouraging sexual reproduction declining. People who only experience responsive desire claim that they never really care about sex until they’re actually doing it—at which point they care very much! Joan argues that this responsive desire is just as intense and valuable as spontaneous desire, it just appears during instead of prior to sex.

Joan’s webinars talk about communicating needs, knowing your needs, as well as scheduling sex and creating responsive desire. She says that her books, blogs and webinars help people respond to and understand their current needs and abilities, and guides people through the conversation.

Joan assures us that senior sex can be better than the sex young people have because the elderly know what they like sexually and in other areas, they’ve learned to communicate very well, and they’ve gained the perspective to understand many problems as easy to overcome or as entirely unproblematic. She implies that elderly men and women have outgrown the shame and reticence most young people feel about sex. In her work, she notices older people are better at truly focusing on the pleasure their bodies are capable of creating, while young people are often fretting about minor bodily imperfections or other insecurities instead of being fully in the present moment.

That isn’t to say no seniors have hang-ups about sex. Jane describes the prejudices her generation internalized about the topic. She informs us that her generation was told not to talk about or have sex until you’re married and that women who don’t have orgasms during intercourse—as most women can’t—were called frigid. She says she is currently working on a webinar to work through this process and help seniors find the words to talk about attaining great sex.

Joan believes that especially for couples without spontaneous sexual desire, it can be sexually rejuvenating to set a date for sex. She explains that seniors can see that date on the calendar and that will cause them to think about sex more often. Scheduling sex also allows for planning the event with special underwear or a romantic setting or any number of other, enjoyable ways to improve sex and foreplay.

Joan suggests scheduling time to talk about sex and the physical and emotional changes that occur as people age. She insists that this can’t be accusatory. It’s meant to inform your partner about your changing body and needs and to invite your partner to do the same.

Joan has been disappointed by surveys surrounding sex, because they often don’t poll the elderly about their sex practices at all. When they do include the elderly, she mentions that they don’t ask the right questions. Usually, she says, they ask whether you’re sexually active, which is a nebulous term.

She believes it would be illuminating if people writing surveys would ask what kinds of sexual activities people are utilizing at different ages. On air, she considers that she could do some of this research herself.

She says her book, Sex After Grief was written after she lost her great love. Joan found herself trying many, many things to try to come back to her sexuality after losing her husband. She recounts her journey and shares the methods others used to overcome grief. She explains that there are many ways to regain your sexuality after the death of a partner, and though no single path exists, this book will help you navigate the loss of your partner and the return to your sexual self with insight and compassion.

Joan has written some about sex inside nursing homes, where you’re kept apart from others, cannot lock the door, and are given no privacy. She says there are a few nursing homes where sexual rights are a priority, based upon the belief that assisted living home residents should not be treated as prisoners. She says that it’s important to research nursing and assisted living facilities to determine whether they have policies in place to enable sexual activity in their facilities.

She explains that it’s important for the elderly to discuss what sexual rights their partners have before their mental state deteriorates or their body becomes too infirm to allow sexual activity. She says that if their partner can’t provide sexual or romantic love, or they themselves are too senile to remember their spouse, it’s important to make decisions about whether their partners finding love elsewhere is blessed or discouraged.

Joan Price is an advocate of ageless sexuality encouraging seniors to reclaim and rejuvenate their sex lives. A public advocate of senior sex since 2005, Joan has written five books to help and sexually engage seniors: Sex After Grief: Navigating Your Sexuality After Losing Your Beloved, The Ultimate Guide to Sex After Fifty: How to Maintain—or Regain!—a Spicy, Satisfying Sex Life, Naked at Our Age: Talking Out Loud about Senior Sex, Better than I Ever Expected: Straight Talk about Sex After Sixty, and Ageless Erotica.

Joan narrated and collaborated with Jessica Drake on her award-winning, explicit educational film “Jessica Drake’s Guide to Wicked Sex: Senior Sex.” Joan maintains a newsletter and a blog on senior sex, and she created an entertaining, free webinar to encourage safer sex among the elderly.